When you need to transfer money overseas, you walk into a bank, and your money is transferred to any part of the globe. How does it happen? The answer is Society for Worldwide Interbank Financial Telecommunications (SWIFT), a member-owned corporation that provides safe and secure transactions between financial institutes.

Since 1973, SWIFT has dominated financial transactions across the globe. It was founded with 239 banks in 15 countries. By 1977, it grew to 518 institutions in 22 countries. SWIFT recorded an average of 41.6 million FIN (financial information) messages per day in 2021. As compared to the previous year, traffic grew by 11.8%.

How Does SWIFT Function?

SWIFT assigns a unique 8 to 11 – character code to each financial institute. The code is called the bank identifier code (BIC), SWIFT ID, or SWIFT code. Let’s assume a Bank of America (BAC) customer wants to transfer money to the Bank of Italy. The customer can walk into the bank with their friend’s account number and SWIFT code to process the transaction.

Bank of America (BAC) will transfer the payment across the secure SWIFT network & once the Bank of Italy receives the payment, it will credit the amount to the friend’s account.

There was a need to develop a framework for standard messages across various domains such as retail payments, trade, securities, foreign exchange (FX), etc. This led to the emergence of ISO 20022 in 2004, a global standard for electronic exchange between financial institutes.

ISO 20022 creates a common language and model for exchange across the globe. Banks worldwide are preparing themselves to transition from SWIFT international messaging to a new, highly structured, and information-rich standard ISO 20022.

Standards are critical components while initiating and reporting financial transactions. An international standard simplifies interoperability and enables the efficient, consistent, and secure exchange of files.

A four-year window is provided for the global SWIFT migration.   It is estimated that by 2025, the standard will support 80% of transaction volume and 87% of transaction value globally. ISO 20022 provides high-quality metadata consisting of descriptions of messages, business processes, and maintenance processes, enabling assured payments at reasonable rates for all the involved institutes.

Importantly, everybody in the industry can participate and implement the standard since it’s not being controlled by any individual organization. The International Organization for Standardization (ISO) first introduced it to give the financial industry a platform for developing messages in extensible markup language (XML).

ISO 20022 improves communication, makes sense of different meanings, and gets everyone on the same page. These goals are accomplished by a syntax-independent approach (simplified structure and form of a message) and semantics (the meaning of these messages). 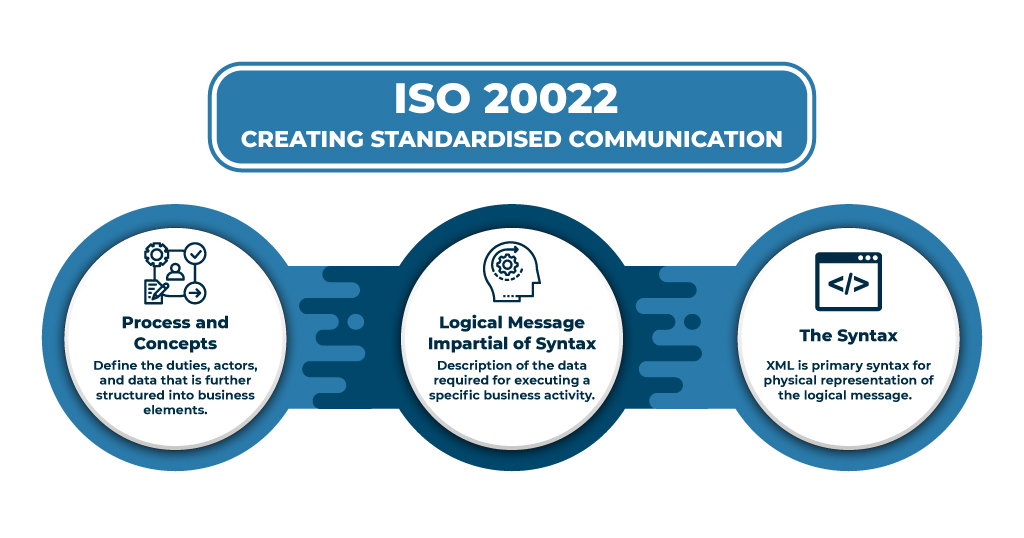 What ISO 20022 helps Define & Compliance to it Helps Achieve/Assure?

One of the major advantages of ISO 20022 is that it captures business transactions in a syntax-independent manner.

ISO 20022 has a centralised ‘Dictionary’ of business terminologies across all financial messages and institutes. It also offers a ‘Business Process Catalogue’.

The data dictionary contains business concepts, message concepts, and data types. The advantage is that anyone who wants to create a compliant message has the liberty to name the elements. But they need to link to base types mentioned in the repository. This ensures common understanding among all the parties.

The catalogue contains business areas that are described in detail using business processes using message flow diagrams. Each message is described in a message definition, which is converted into ISO 20022 syntax message schema. Global adoption of ISO 20022 will create a common language and provide high-quality data transfer and faster payments for everyone involved in the payment chain. The open standard is flexible to changing needs and requirements of the payment industry. Some of the key benefits of ISO 20022 :

Failure to comply in the four-year migration window can lead to shutting down of international payments for financial institutes. There were several roadblocks on the way. Firstly, they must integrate all the points with multiple systems which have payment systems across the globe.

Financial institutes also need to ensure that the bank is compliant with SEPA credit transfer (SCT). A wide range of local product variants and processes must also be incorporated.

Global Impact and Adoption on ISO 20022

Japan’s Central Bank redesigned its real-time inter-banking system to ensure it is ISO 20022 compliant. Singapore’s Central Bank has started the transition and will migrate this year. Systems in China and India are already compliant and reap the benefits of ISO 20022.

ELAIT’s Services For Migration to ISO 20022

Ab Initio can be used in meeting ISO 20022 messaging standards and tracking flows throughout the process. As a transformation tool, it can create the format for any file and break it down into more granular details to help trace the sources and targets of the transfer details. What is Automation Testing ?

What Is ETL Testing?